Apply for the Summer of Code

Google has opened the registration process for students. Please sign yourself up for the Summer of Code.

Today when I opened my mail client I was surprised by a “new theme”, I looked at it and saw a GTK2 Java development IDE which some interesting Irssi/IRC embedded into it. 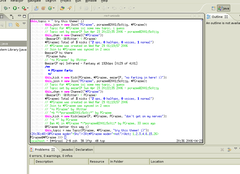 I have to admit that this is the most funniest Irssi theme I’ve seen so far. It’s amazing what people can do to reach their goals (or to hide their client @ work :p).

The c0ders theme has been added to the themes page. We will add the other submitted scripts and themes when we start working with Google’s Summer of Code.

Hint by the author:

It comes in real handy at work, where not every should see on the first look that i’m actually chatting ;)

Irssi and the Summer of Code

This year, the Irssi project is participating in Google’s Summer of Code, which provides funding for students to work on open source projects over the summer. This page aims to provide some information for students interested in taking part and working on Irssi. It contains some project ideas to use as a basis for your proposal, information on the mentors with whom you will be working, and some tips on structuring your proposal.

We would like to thank everyone who submitted a logo, the competition is now closed and we will be announcing the winning logo momentarily.

Due to a bug in the Gentoo autoconf package we decided to release a new source-package generated on a Debian system.

We apologize for any inconvenience caused by the previously released version. Please bear in mind that this release does NOT include any new features or code-changes. It’s just a re-packaged source.

If you have problems compiling Irssi due to autoconf or ./configure errors, please go to the download section and give the re-packaged source a shot.

Scripts not working in version 0.8.10

Posted by christel on December 22nd 2005

We are aware that some of the scripts that can be found on our scripts page are not working in v0.8.10, however, the scripts are primarily made by users and not the irssi team and thus it has not been our priority to ensure that all scripts are working / updated to work before releasing a new version. You are however welcome to submit updated/fixed scripts to us and we will add them to our script repository after testing. Keep in mind that if you are modifying someone else’s code we ask that you leave a comment informing what has been changed and who the script was originally written by; you all know the drill! Scripts can as usual be submitted to scripts.irssi.org.

As a side note, we have received a few submissions with ideas for new logos, some of which are rather good! Thanks to those who have submitted. Keep sending us your artwork and we will make a decision soon-ish on what to use! The address to use for logo submissions remains the same.

If you have any feedback about what you would like to see on the webpage, anything in particular you would like more of etc etc please let us know! You can get our attention by e-mailing staff.

We hope you have all enjoyed the new release and we wish you a Merry Christmas and a Happy New Year!

This is the moment we have all been waiting for…

It is our pleasure to finally be able to release the latest stable version of Irssi v0.8.10. This would be where we’d say “cue drumroll” and the percussionist would start playing, however our drummer is chatting. So we shall instead start by introducing the Developers that have been working on this release! It is our pleasure to extend thanks to the following people:

Since Irssi v0.8.9 we have made a lot of changes, lets take a look at the top new and exciting features. Feel free to check our NEWS file for a summary of the changes.

What’s new in this release?

With that, we release Irssi v0.8.10 into the wild and we hope you enjoy it as much as we have enjoyed working on it!

Irssi has had a bug reporting system for a while now, thanks Geert. It’s now the preferred way to report bugs. You could go and fix some of the reported bugs too :)