It all started in 2005, when I asked in FS#310 whether vertical splits would be possible. By that, of course, I meant to split the windows horizontally in a line. At that time, the most popular version of Irssi had been 0.8.9 for several years.

Fast forward another ten years, Ido Rosen transferred (half of) this issue to the new GitHub issue tracker. He compared the situation to WeeChat, another popular text mode IRC client which does support this. Technically, that application is using the curses library for text mode user interfaces, which can handle most of the window drawing. 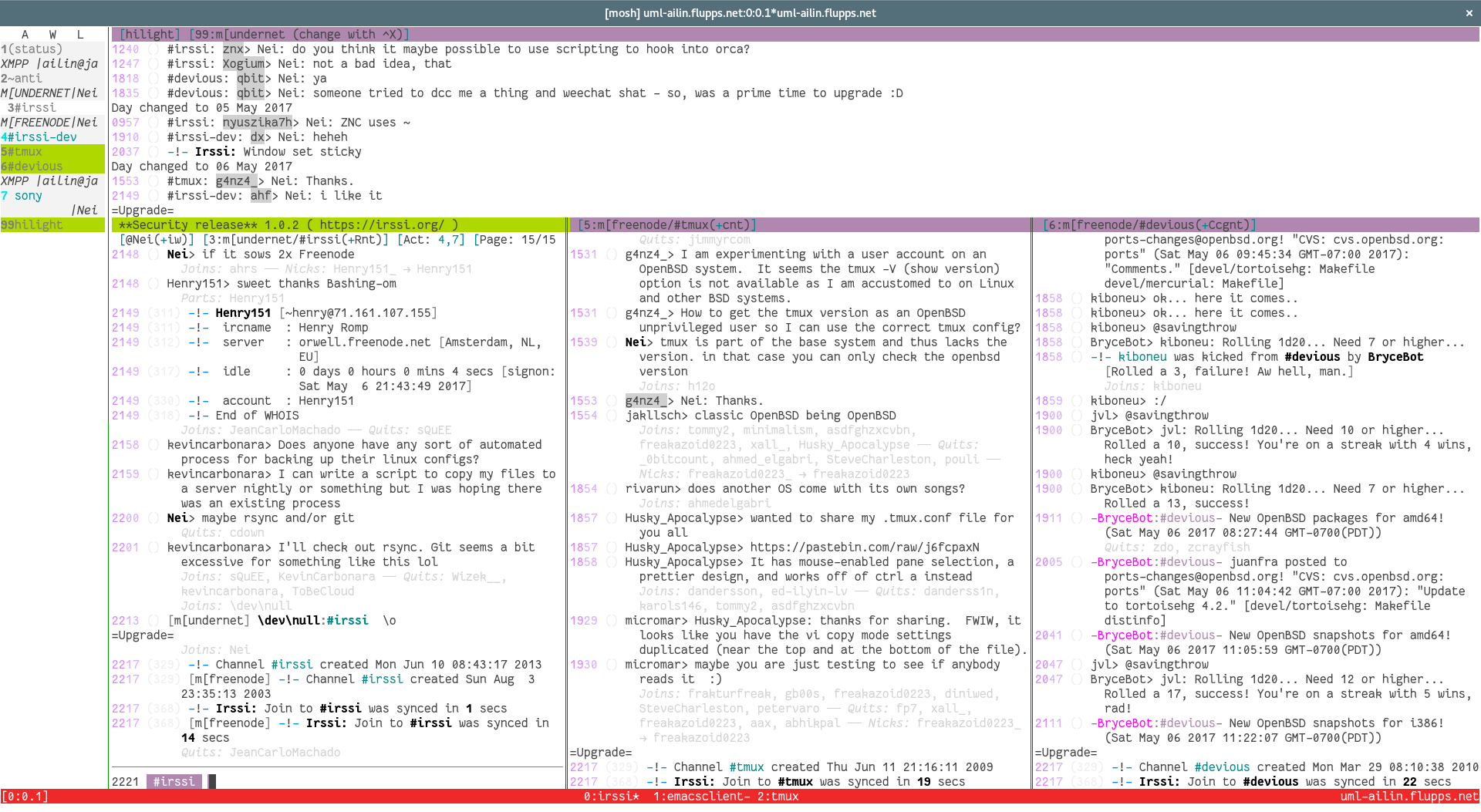 Irssi has its own screen drawing implementation. One advantage of that is that long links can be displayed as “single word” even when they wrap at the terminal border. Another one is support for arbitrary colour pairs, which is limited in curses. However, it also means more work for window handling.

In 2016, I coerced TheLemonMan into writing an initial draft of the horizontal window splitting code. Turns out it wasn’t that much code after all! A good deal of the required work had already been done by Timo Sirainen (the original Irssi author) in 2001.

Any complicated window handling logic however did not exist. So after some vague promises in 2015, I picked up the ball again this year, and tied up the knots, making some compromises to keep the model simple and close to the original (arguably limiting the features somewhat in comparison with the competitors).

12 years from my initial report, I am now close to resolving half of my own request. The resulting code is currently in the development version of Irssi and waiting for you – or anyone else interested in this feature – to test it.

After compiling Irssi from git, your Irssi will understand new commands: /window new -right split - to make a new sideways split, /window show -right <number> - to show an existing window to the right, and /window grow/shrink/size/balance -right - to manipulate the size of your sideways split windows.

A short reminder how to use Irssi split windows.

Generally, you have the choice of generating “transient” split windows, which allow you to display any window not currently visible (or stuck) in another split window. The split window contents changes whenever you change to another window while this split window is active.

The second choice is to stick one or more (numbered) windows to a split window. This can be done with /window stick. When you switch to this window in the future, it will always appear in the corresponding split window. Remember, you can always check the sticky state of a split window by typing /window (without arguments).

To move between your split windows, use Alt+Up/Down (/window up/down).

One final tip, the default Irssi configuration makes it a bit hard to tell which split window is active. My personal favourite is this small configuration change:

that will move the input line into the active split window. Another choice would be to change the statusbar colour in your theme, by adding sb_window_inact_bg = "%6"; to the abstracts.

That said, there is still lots of things to do:

If any of that seems interesting to you, do not hesitate to contribute the code. We can also discuss any details if you feel unsure how to approach some things on IRC (#irssi on irc.libera.chat)